‘The Sleeping Congregation ... Retouched & Improved April 21 1762 by the Author’ 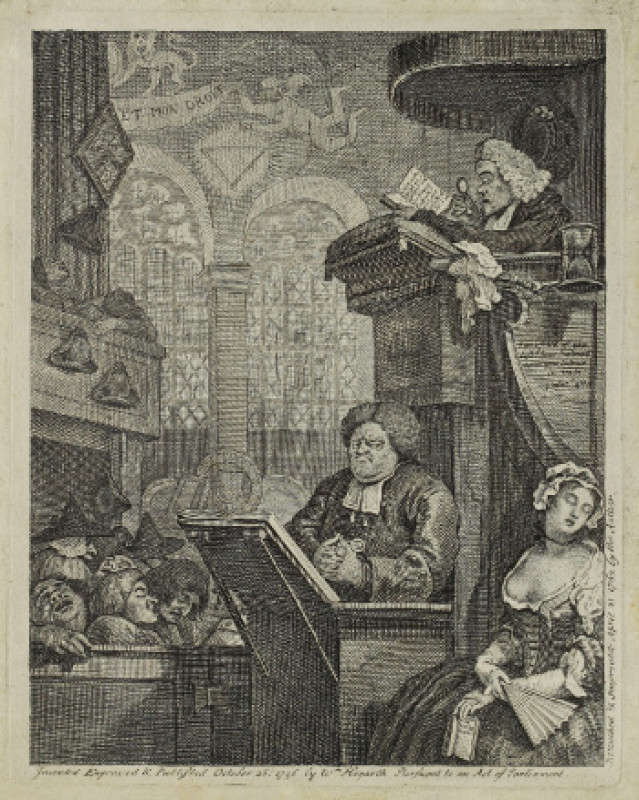 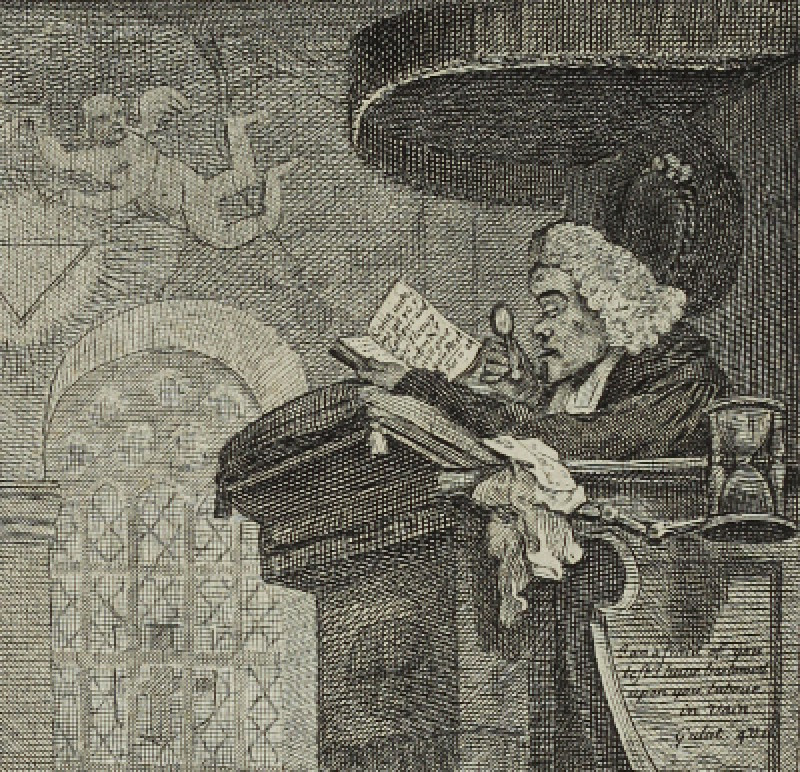 Fourth state, [?]early nineteenth-century issue. The painter and engraver William Hogarth (1697-1764), was unable to study at university or train in a profession due to the debts his father accrued in failed attempts to publish Latin and Greek textbooks and establish a Latin-speaking coffeehouse in London. Therefore, Hogarth was apprenticed to the silver-plate engraver Ellis Gamble from circa 1714 onwards and in 1720 he set up as a copper-engraver, the same year in which he enrolled at the St Martin’s Lane Academy. In 1724 Hogarth joined James Thornhill’s drawing school in Covent Garden and his marriage to Thornhill’s daughter Jane in 1729 opened up new commissions and opportunities for him. In the early 1730s he had much success as a painter of conversation pieces, and also developed his ‘modern moral subjects’ – ‘pictorial narratives of contemporary-life subjects in series’ (ODNB) – which famously included A Harlot’s Progress (the engravings of the paintings published by subscription in 1732) and A Rake’s Progress (completed 1734). The later 1730s and 1740s saw Hogarth’s establishment as a portraitist, and eventually he would be named the ‘father of British painting’ (ODNB).

Hogarth is perhaps still best known for the satires that established his fame from 1721 onwards, including this engraved plate, ‘The Sleeping Congregation’. Based on a rough oil sketch of 1728 – and possibly inspired by ‘the universal sleep that concluded the third book of Pope’s Dunciad Variorum (1729)’ (Paulson) – the ‘scene is a perpendicular Gothic, an iconoclasted Anglican church. Roman Catholic idolatry has been expunged. [...] [I]n the one remaining piece of stained glass, the cross has been replaced by the royal cross of St. George. The only trace of art is the disjointed angel who now serves as a supporter of the royal arms. Worship has only been displaced from images of God to the monarch [...] [or] to a family escutcheon, here attached to a pillar, showing a chevron sable between three owls (creatures of the night and dullness). [...] At a more popular level, devotion is being displaced from the image of the Virgin or any other icon to the sleeping young woman (with an exposed bosom) who, dozing with her prayer book open to the service “OF MATRIMONY”, has displaced her own worship to thoughts of a husband. From the ogling clergyman’s point of view, she is the idol. But for the majority of the congregation spirituality has been replaced by – or returned to – sleep. As if the image itself of somnolence were insufficient, Hogarth adds the words: “Come unto me all ye y[a]t labour and are Heavy laden & I will give you Rest Mat 11 28.” On the side of the pulpit: “I am afraid of you, lest I have bestowed upon you labour in vain Galats 4th 11.” [...] The sand in the hourglass, marking the length of the reading, has completely run out: implying both the length of the sermon and, as usual with Hogarth, that “time has run out”’ (Paulson).

A number of interpretations have been placed upon the inverted triangle on the wall, and Paulson hypothesises that, due to ‘the early identification of the officiant as a portrait of the important Freemason John Theophilus Desaguliers (1683-1744)’, it was ‘intended [...] as a masonic triangle to suggest the secularization of the church into a lodge’. Certainly, this association has been widely accepted by Freemasons and the original copper plate was purchased by the Quatuor Coronati Lodge of London in 1921 (it is now in the Lewis Walpole Library, Yale).

This is the fourth state of the print and can be identified by the additional inscription on the right-hand margin and the two warts on the forehead and cheek of the reader’s face. BM Political and Personal Satires states that ‘[t]his plate, in the fourth state, was used for “The Works of William Hogarth from the original Plates restored by James Heath, Esq., R.A.” London, no date (1751.d.) In this case “Price One Shilling” is scarcely visible’, as here, so this plate is likely to have come from one of Baldwin, Cradock and Joy’s editions of the Heath plates published from 1822 onwards.

This example is from the collection of the noted bibliophile Stephen Keynes, a great-grandson of Charles Darwin and a member of the Roxburghe Club, who assembled extensive collections which were particularly rich in prints, illuminated manuscripts, and printed books.