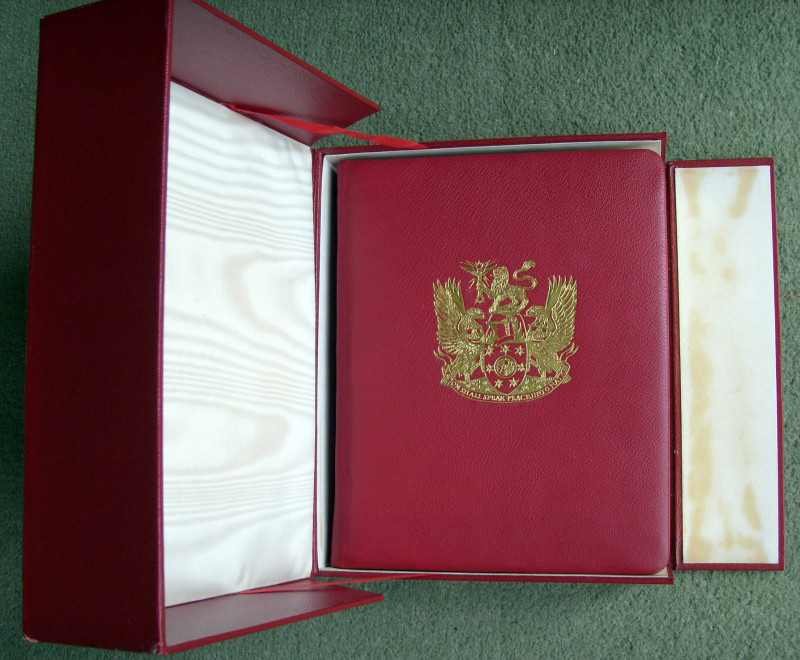 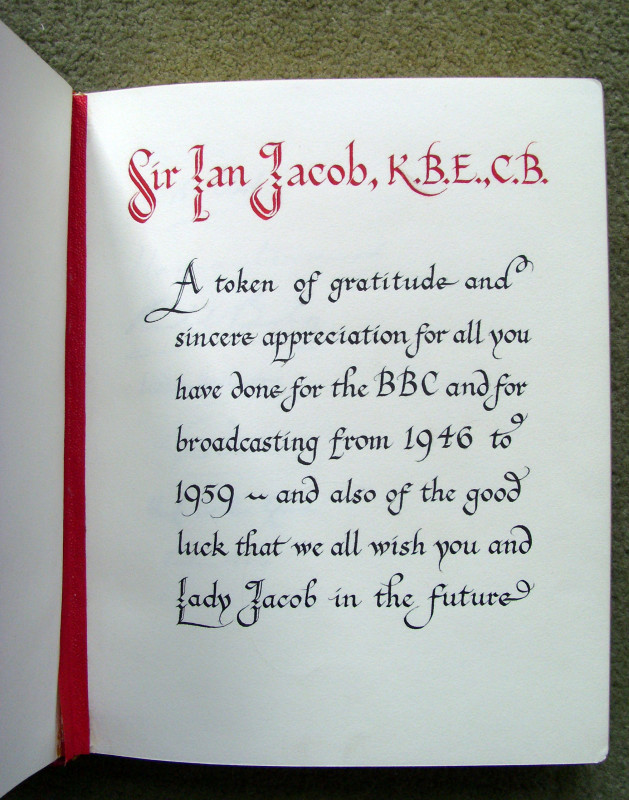 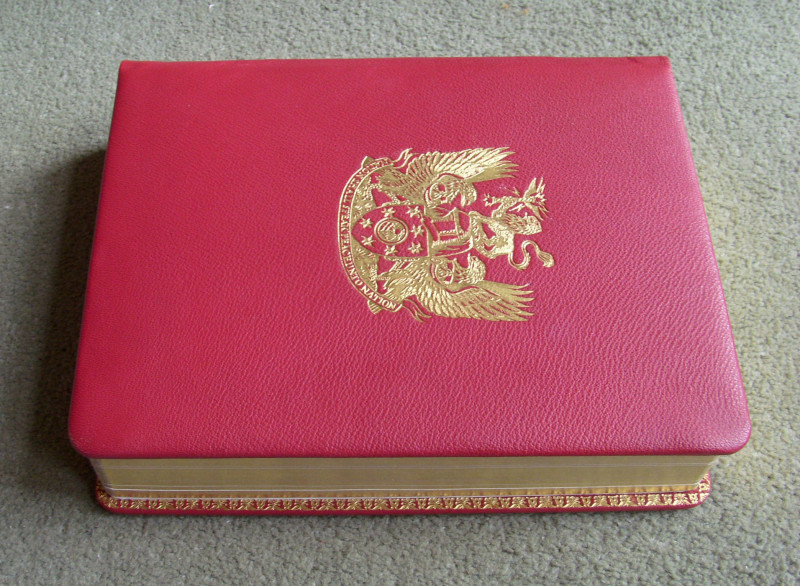 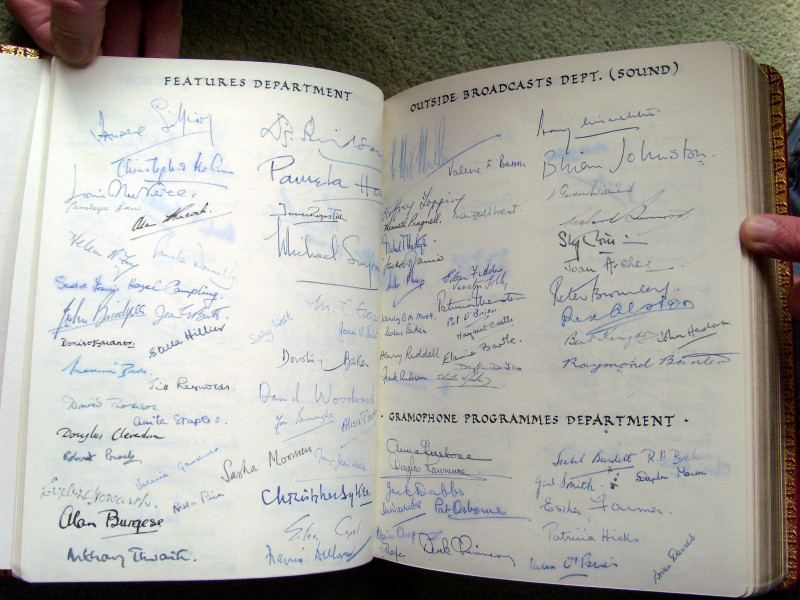 An album presented by the BBC to Sir Ian Jacob when he retired as Director-General in 1959. The album contains approximately 12,000 signatures of BBC members of staff from all departments from Sound Broadcasting to Programme Correspondence, including all the Regions and Overseas Offices. A mammoth undertaking that seems unimaginable in these times. The album measures 10¼ x 8¼ and is approximately 2½ thick, bound in full crimson morocco with gilt edges and the BBC coat of arms embossed in gold in the centre of the front cover. The inner edges of the binding are tooled in gilt and the endpapers are of white silk. The whole is contained in a specially made matching fold-over lined box which also bears the BBC coat of arms. Signatures include Hugh Carleton Greene, Harman Grisewood, John Snagge, Val Gielgud, Donald MacWhinnie, Louis McNeice, Laurence Gilliam, Douglas Cleverdon, Nesta Pain, Brian Johnston, Sandy McPherson, Grace Wyndham Goldie, Huw Wheldon, Eric Maschwitz, Denis Norden, Dennis Main Wilson, Stuart Hood, Gerald Priestland, Kenneth Kendall, Richard Baker, Godfrey Talbot, Tangye Lean, Charles Curran, Martin Esslin, Douglas Birkinshaw..... The condition of this unique item is excellent. Sir Edward Ian Claud Jacob GBE CB, served as Military Assistant Secretary to Winston Churchill’s War Cabinet. In 1951 he became Chief Staff Officer to Churchill who was both Prime Minister and also Secretary of State for Defence. In 1952 he became Director General of the BBC, a post he held until 1959 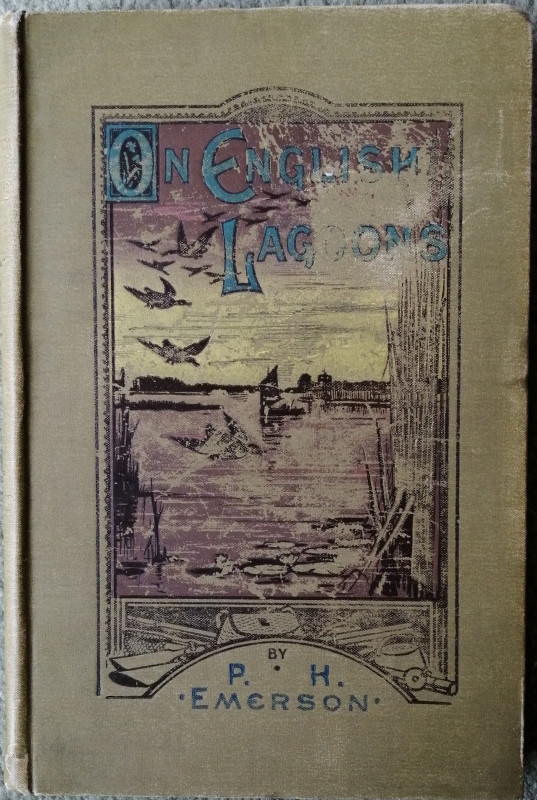 The Sleeper Gazette of 923 TSC RE Unit 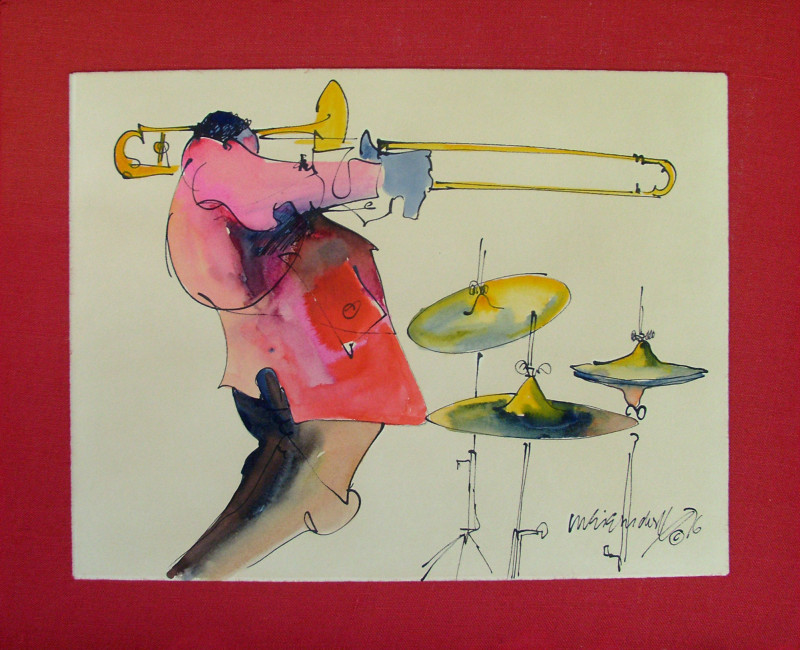 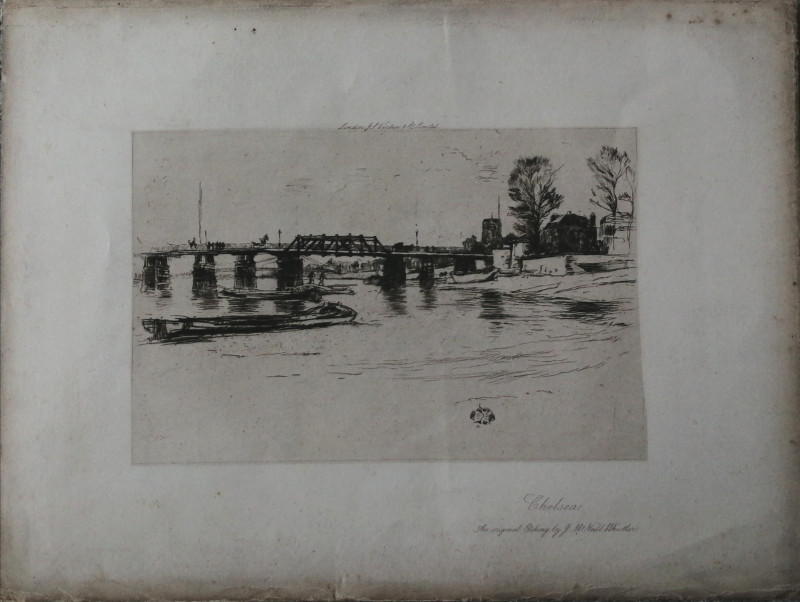 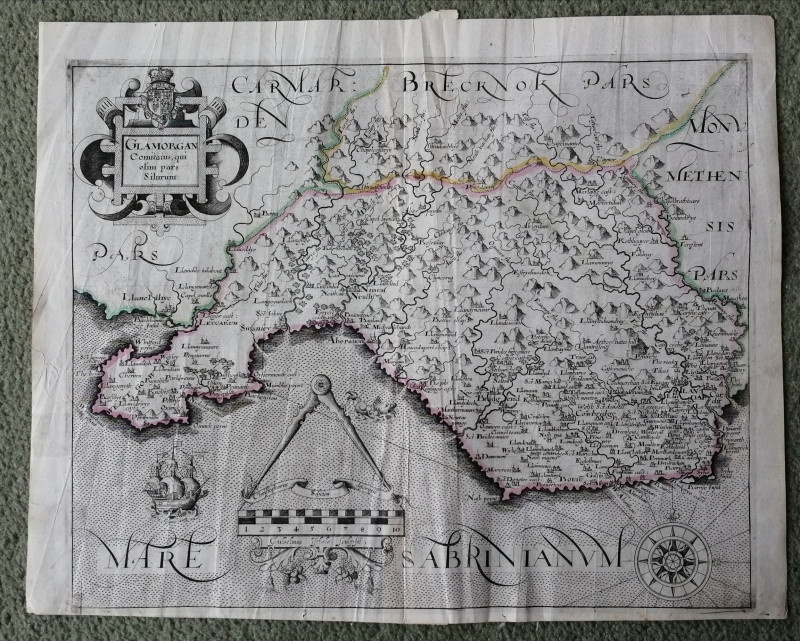 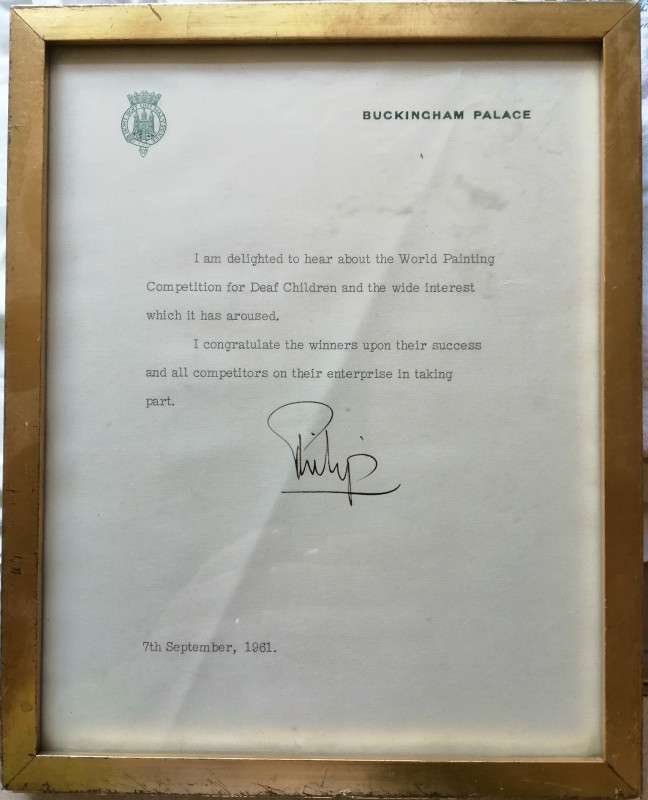 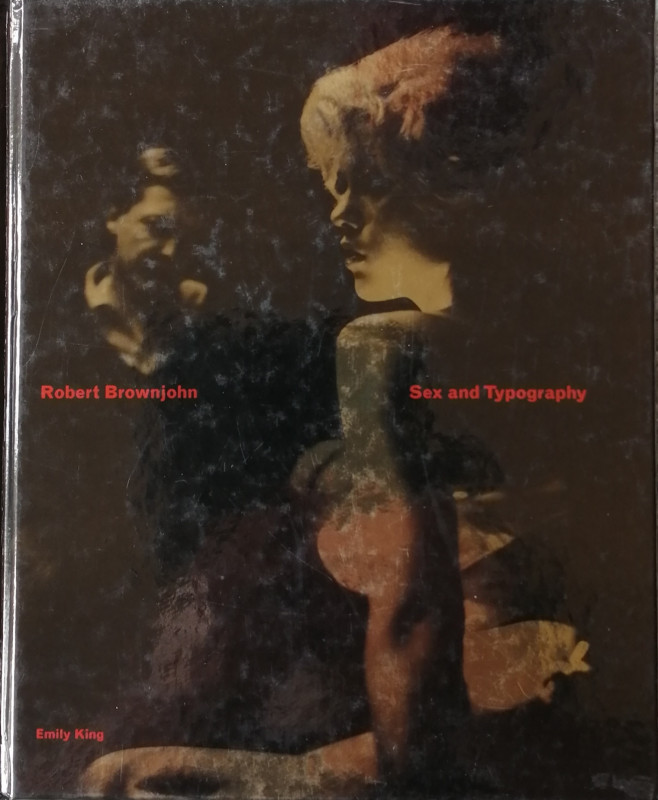 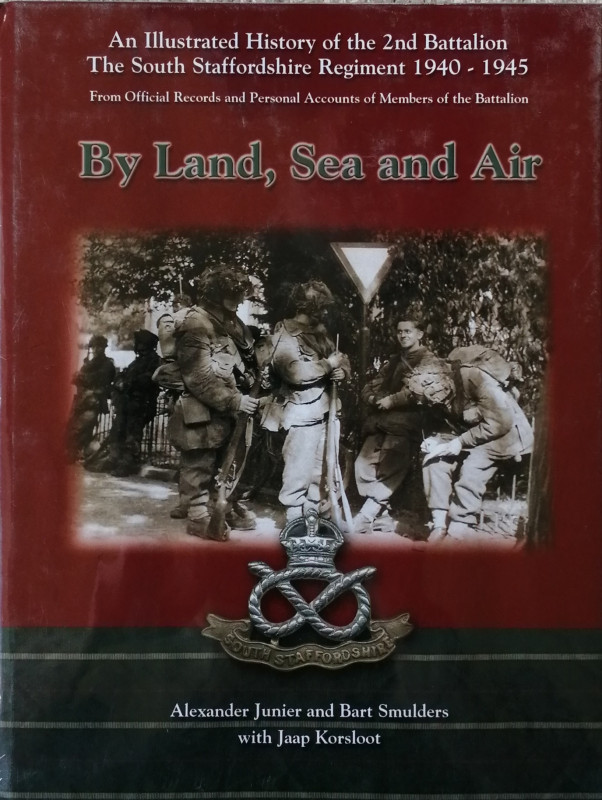 By Land Sea and Air. An Illustrated History of the...

Observations on the prevention and treatment of th... 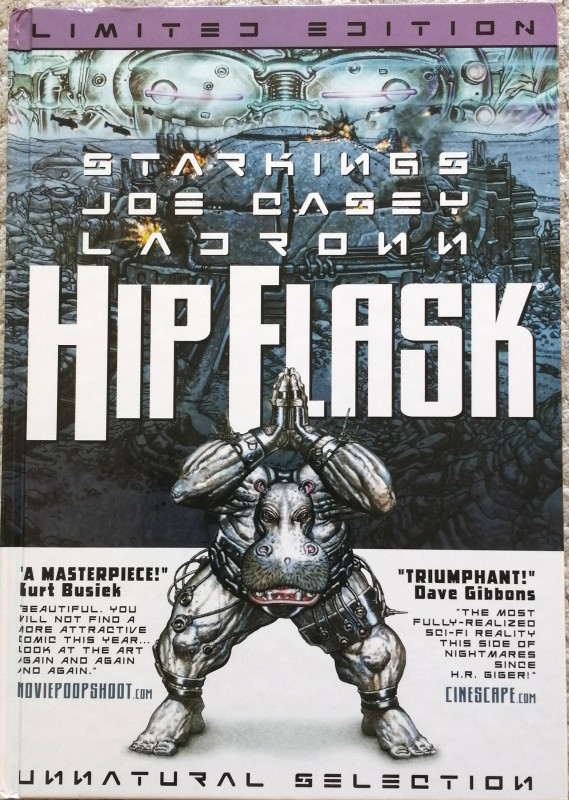