A.E. Housman, A Sketch. Together with a List of his Writings and Indexes to his Classical Papers 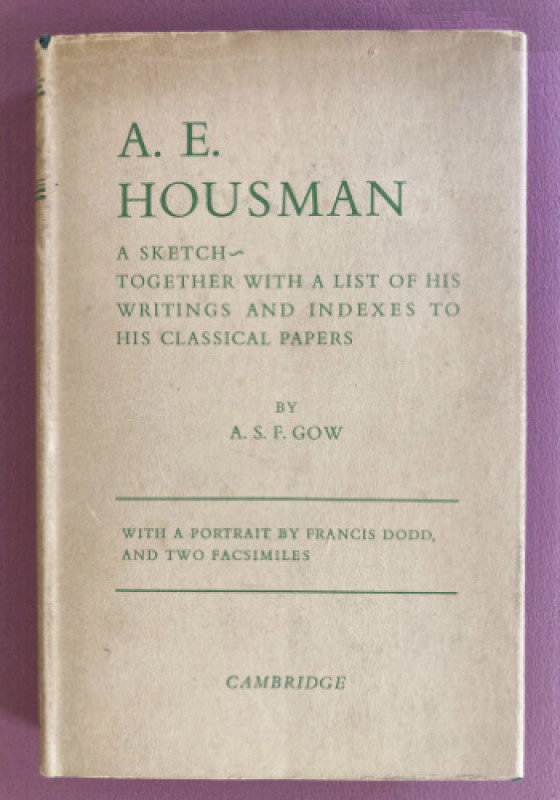 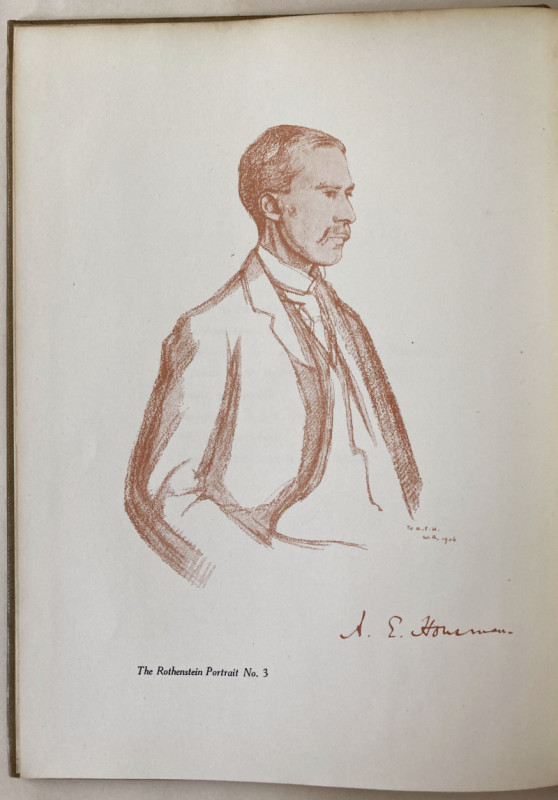 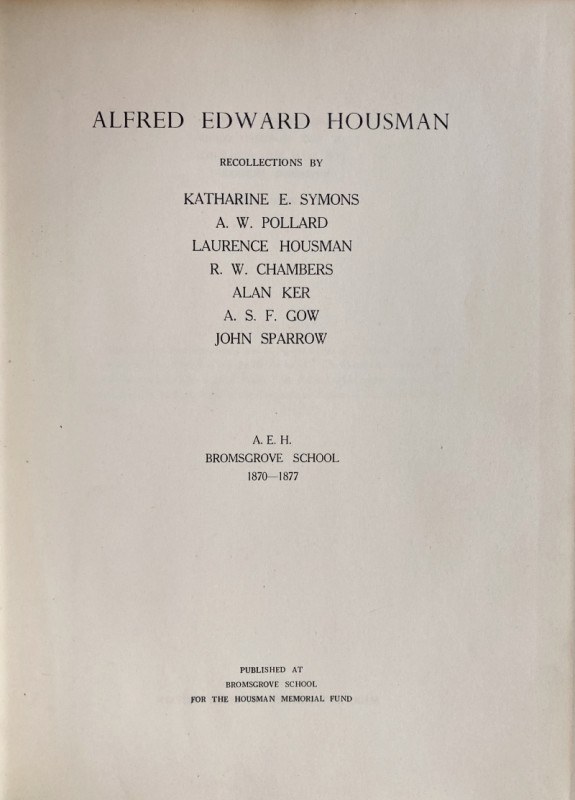 First edition. The poet and classical scholar Housman (1859-1936) was educated at Bromsgrove School and St John’s College, Oxford, before taking up a position at the Patent Office in London in 1881. During his leisure, Housman continued his study of classics, and began to publish on Latin and Greek authors. In 1882 Housman applied for the professorships of Latin and Greek at University College, London, and on 24 May 1882 he was appointed to the professorship of Latin. ‘For nearly nineteen years Housman served University College well, contributing to its administration and its social life, as well as being responsible, at first almost single-handedly, for the teaching of Latin, and playing a significant role in improving the college’s academic reputation, at a low ebb on his arrival’ (ODNB). At University College Housman had also written the poems which were collected in A Shropshire Lad (1896), which became one of the best-known volumes of poetry of the era. In 1911 Housman left London to take up the chair in Latin at Cambridge University and a fellowship at Trinity College, Cambridge, and he remained at Cambridge until his death on 30 April 1936.

One of Housman’s close colleagues at Trinity was the noted classicist A.S.F. Gow (1886-1978), who had been an undergraduate at Trinity before he ‘won a Trinity prize fellowship with a dissertation consisting of a miscellany of papers, several of which were later expanded into valuable articles’ in 1911 (ODNB). In 1914 Gow became a master at Eton College but in 1925 he returned as a teaching fellow to Trinity, where he remained until his death. Housman had appointed Gow his literary executor in his will, and Gow’s A.E. Housman, A Sketch. Together with a List of his Writings and Indexes to his Classical Papers, an ‘admirable memoir’ (J. Carter and J. Sparrow’s A.E. Housman. An Annotated Hand-List (London, 1952), p. 44), was published some months after its subject’s death. In his preface to the volume Gow explains that he would not have written his memoir ‘if any comprehensive biography were in prospect’ (p. viii). However, ‘Housman the poet and Housman the scholar, though not so far apart as is sometimes supposed, at least demand of a biographer qualities widely different and seldom united. Moreover, Housman’s life falls into several markedly distinct sections, and it is hard to see who could treat of them all with sufficient knowledge. In these circumstances, it seemed likely that [...] scholars [...] might welcome a brief outline of his life and some account of his scholarship; and since, to borrow his own phrase, “now begins the steady encroachment of oblivion as those who remember him are in their turn summoned away”, I have not thought it impertient to interweave with these an impression of Housman as I knew him during the last twenty-five years of his life’ (pp. viii-ix).

Gow’s memoir – which ‘throws more light upon [Housman] than almost any of the studies by literary persons’ (ODNB) – is followed by lists of portraits of Housman and of his lectures, ‘List of Writings’ and ‘Indexes to the Classical Papers’. Gow notes in his preface that the death of a scholar of Housman’s stature who published widely in journals would usually ensure the publication of the collected papers, for ‘the convenience of scholars no less than respect for his memory’ (p. v). Housman’s will, however, expressly prohibited the publication of such a collection, causing Gow to publish his bibliography of Housman’s writings, which was based on the author’s own papers and had been corrected by Housman during his lifetime. The ‘List of Writings’ is subdivided into ‘Greek and Latin’ and ‘English’. While the first of these subdivisions was believed by Gow to be ‘’substantially complete’ (p. vi), the latter is more selective and omits, inter alia, poems which were not collected in book-form and reprints of collections of poems, leading Gow to acknowledge that ‘strict bibliographers will find much to reprehend’. Nonetheless, Gow’s access to Housman’s paper and his subject’s corrections to and revisions of the bibliography ensure its continuing utility. The volume also includes the first publication of a couplet by Housman, a letter from Housman to Gow (illustrated as one of the facsimile plates), and other material. The following year, Gow would also provide a prefatory note to the first publication of Housman’s Introductory Lecture Delivered before the Faculties of Arts and Laws and of Sciences in University College London October 3, 1892 (Cambridge, 1937).