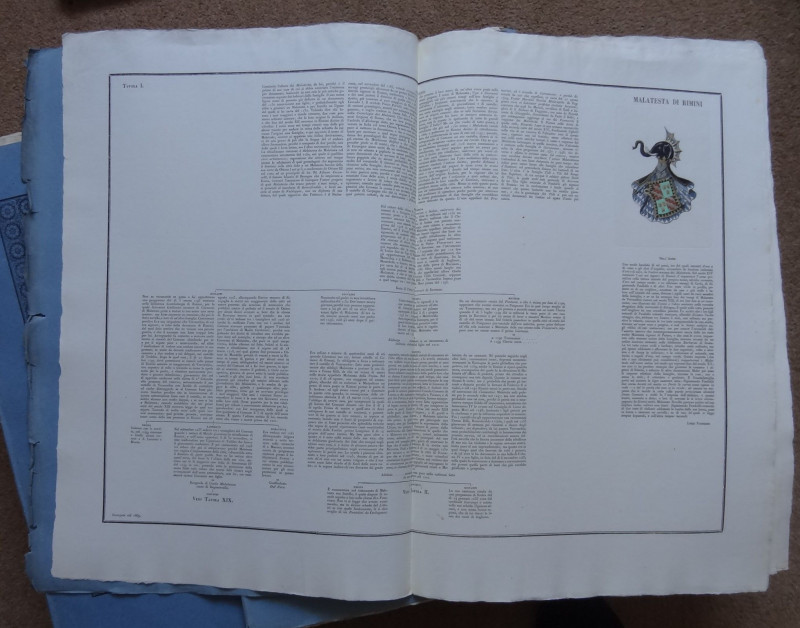 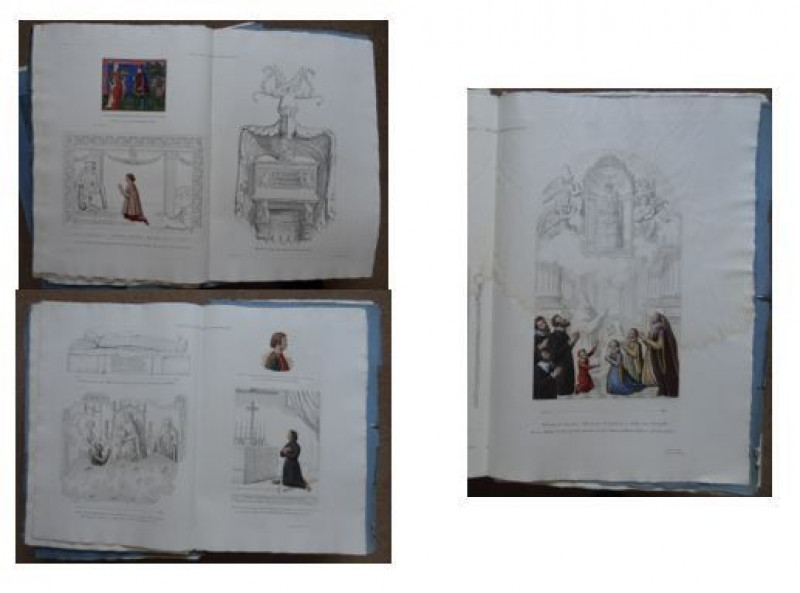 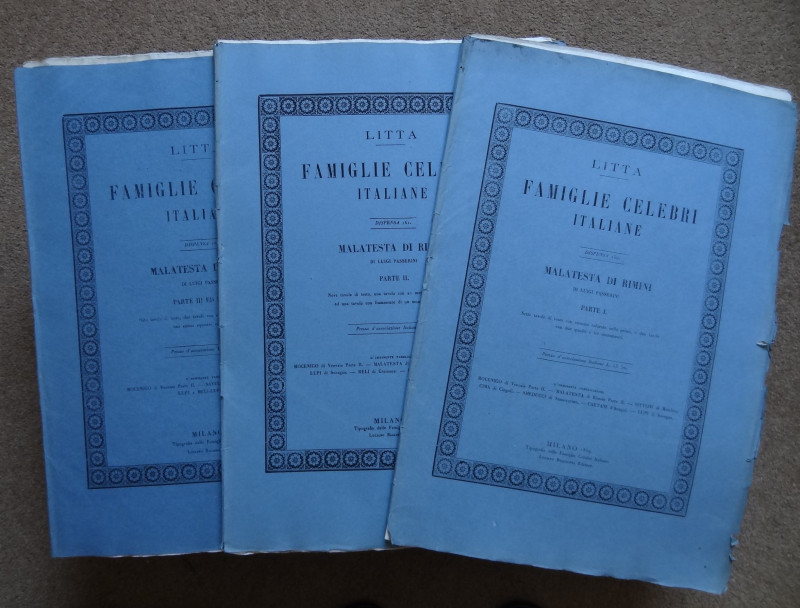 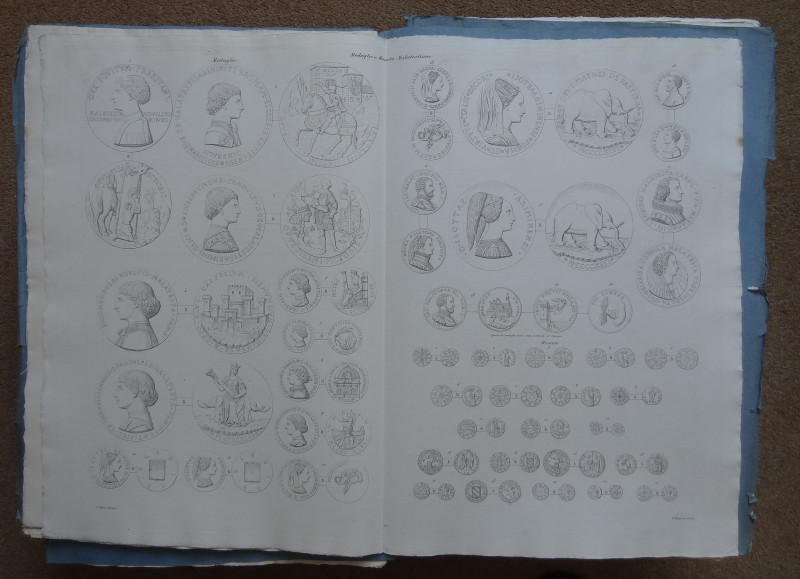 Famiglie Celebri Italiane covers 150 families and runs to a total of 184 Dispensas which appeared from 1819 to 1883. Only the most notable of noble houses in Italy, those who were especially "famous", or distinguished in some way, were worthy of Litta’s notice. His legacy is a fascinating insight into the military, political and ecclesiastical dynasties of Italy. At the time of Litta’s death in 1852, only 113 Dispensa had been published. Luigi Passerini Orsini de 'Rilli, Federico Odorici and Federico Stefani collaborated to complete the series, with contributions by Francesco di Mauro of Polvica and Costantino Coda (although errors, such as the reversal of colours in coats of arms, occasionally occurred). In 1862, the rights and documents were transferred to Luciano Basadonna, who republished the whole work. Each genealogy (Tavola) is printed on double-leaf letterpress plates, versos blank (unless otherwise stated) and is inset with brief biographies of the most prominent characters of each of the family, together with other items of interest, such as famous portraits (some with tissue guards) and drawings of coins or medals. Some Dispensas include maps of territory owned or governed by the families. In some fascicles, there are also drawings of castles and other buildings, such as family monuments and tombs, many of which had already been destroyed at the time of publication; thus, these documents are also an important art historical record. The Malatesta family rose to prominence in the fourteenth century, when Malatesta da Verrucchio (died 1312) made himself master of Rimini by slaughtering his rivals. The family’s lands were extended, sometimes by fair means (papal investitures) and sometimes by foul. Many of the family were notorious for their crimes and cruelty. One, Giovanni Malatesta, is known today for the murder, in 1285, of his wife, Francesca da Polenta, and her lover, his own brother Paolo: the crime being recorded in Dante’s "Inferno". However, two of them were men of virtue: Carlo (died 1429), a staunch supporter of the Church, represented Gregory XII at the Council of Constance, whilst Galeotto Roberto (died 1432), became a Franciscan. Dispensa 159. Malatesta di Rimini, Parte I. Luigi Passerini. 1869. Contents: Tavola I – VII; Monumento e Quadri Malatestiani x 2 (black and white drawings of monuments; one with a tissue-guarded coloured image of a man and a woman). Dispensa 161. Malatesta di Rimini, Parte II. Luigi Passerini. 1869. Contents: Tavola VIII – XVI; Frammento di un Monumento e Ritratti Malatestiano (black and white drawings of tombs, with two tissue-guarded coloured portraits); Medaglie e Monete Malatestiane Dispensa 162. Malatesta di Rimini, Parte III Ed Ultima. Luigi Passerini. 1870. Contents: Tavola XVII – XXIV; Monumenti Malatestiani x 2 (black and white drawings of tombs, with a tissue-guarded coloured portrait). 49 cms tall x 35 cms (70 cms opened).
Publisher Milano
Condition Blue paper covers; wear and tears around the edges and on the fold. The contents of Dispensa 159 and 161 have wear and some soiling to page edges, but are otherwise in very good condition. In Dispen 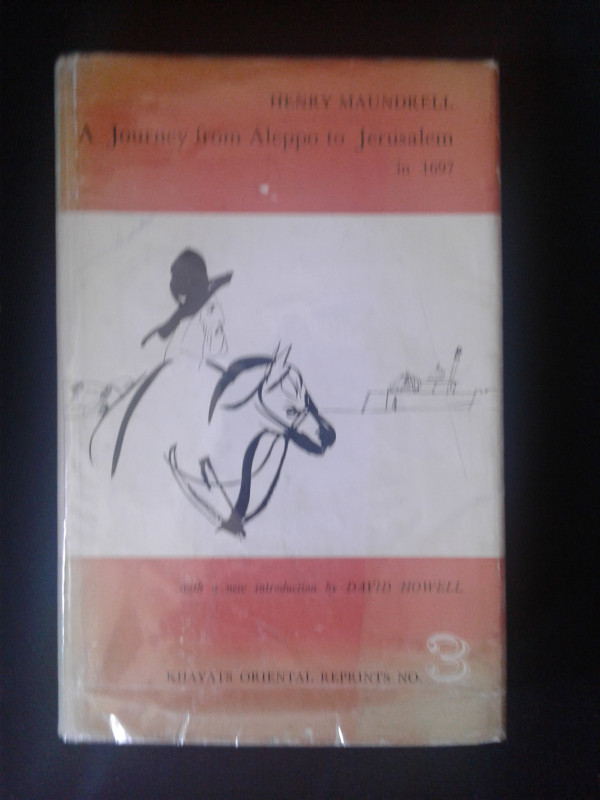 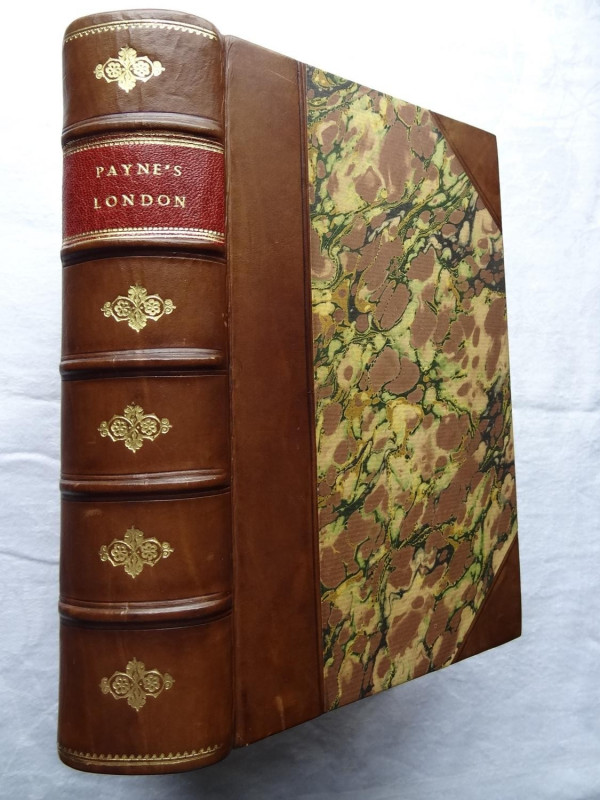 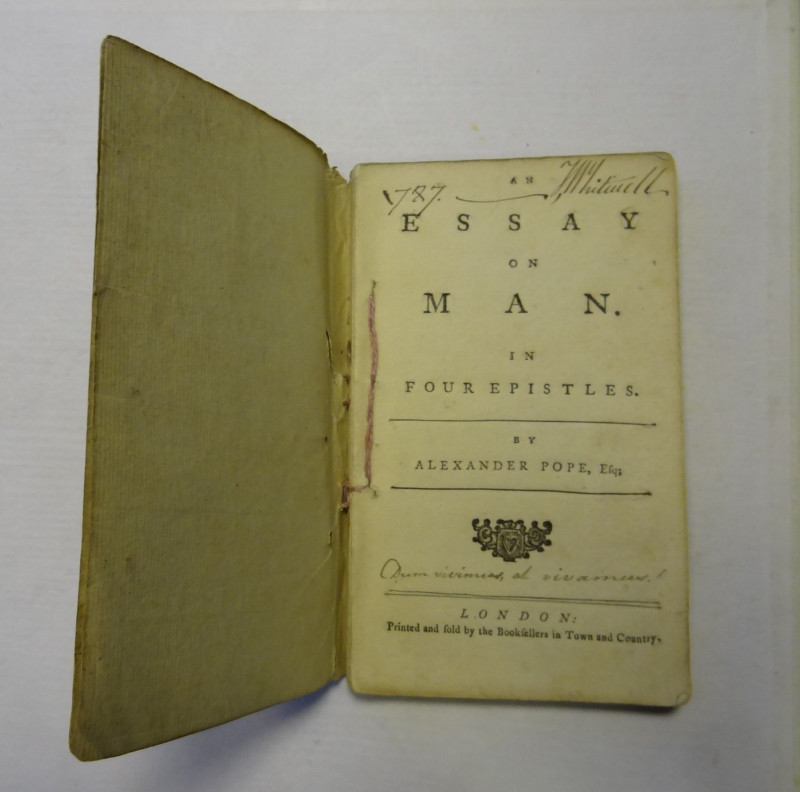 An Essay on Man in Four Epistles

Printed and sold by the Booksellers in Town and Country 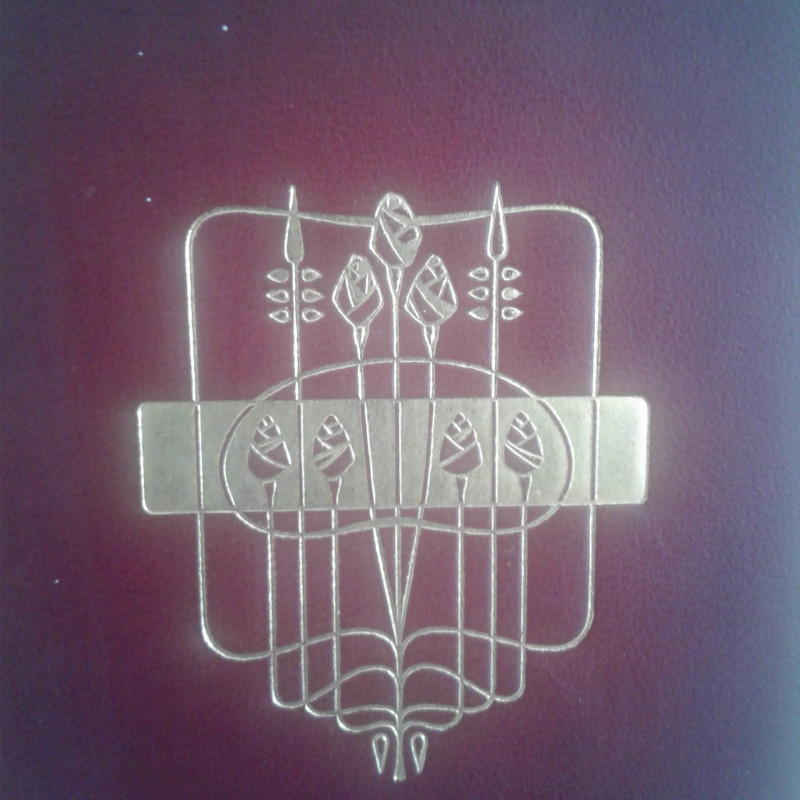 The Autocrat of the Breakfast Table by Holmes 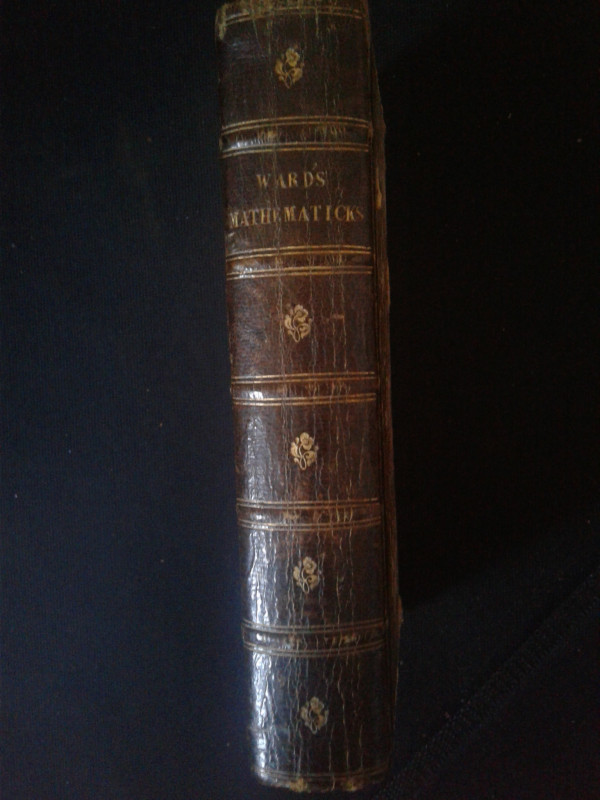 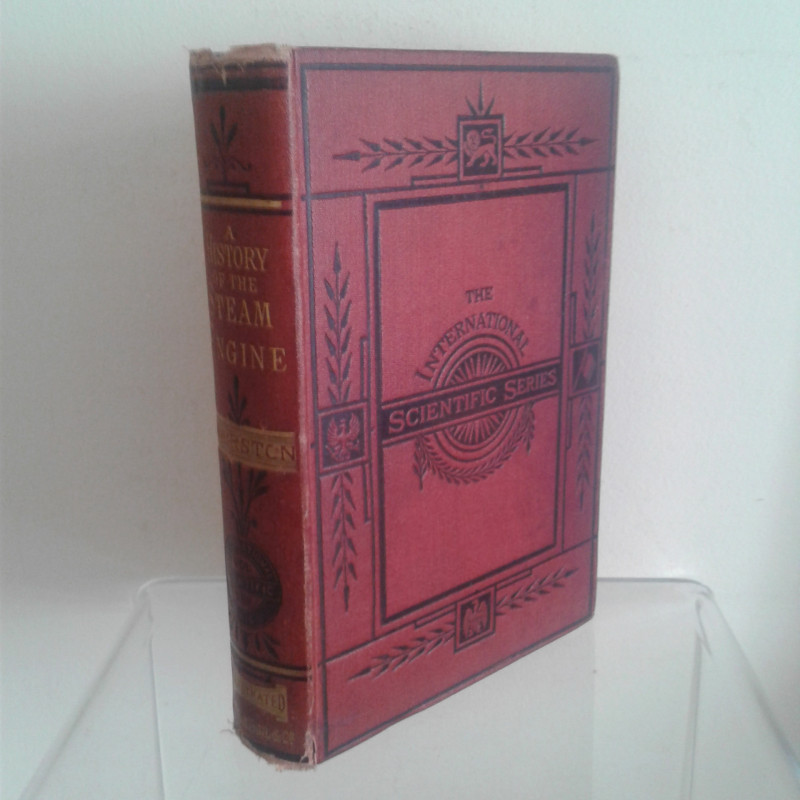 A History of the Steam Engine (scarce first editio... 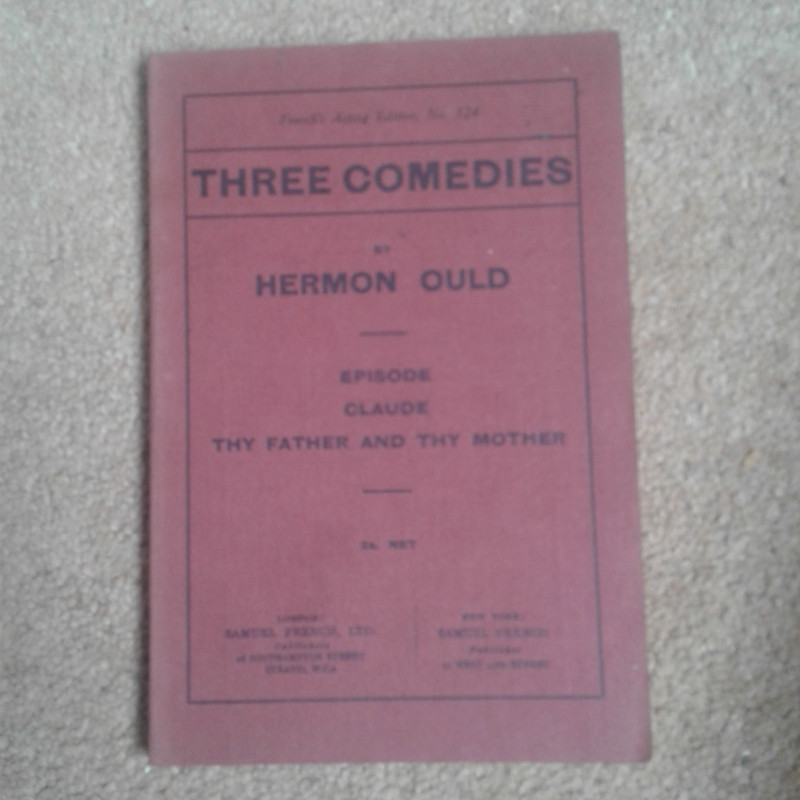 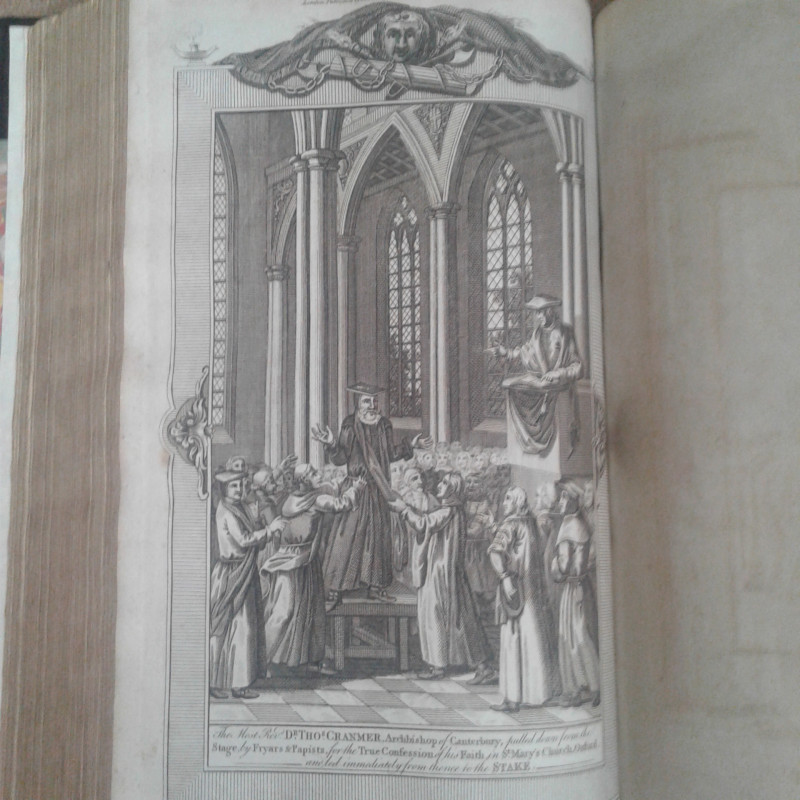 The New and Complete Book of Martyrs by P Wright a... 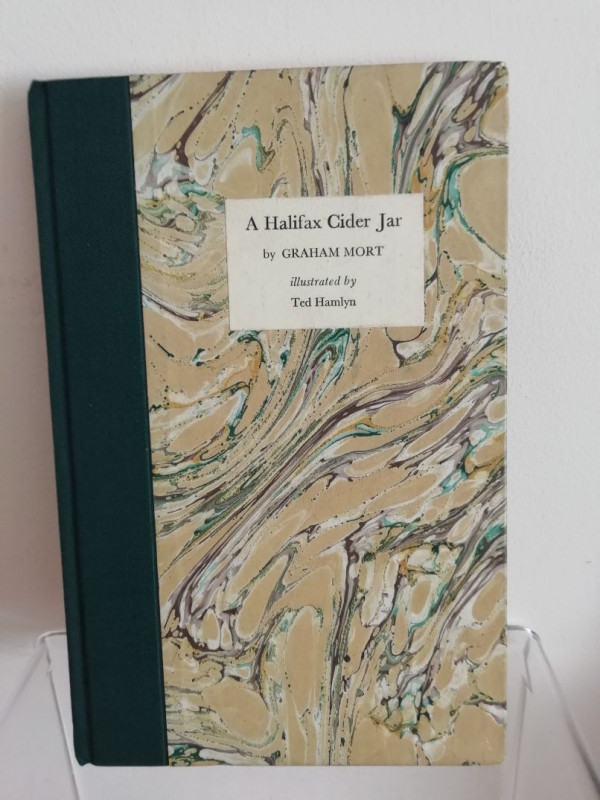 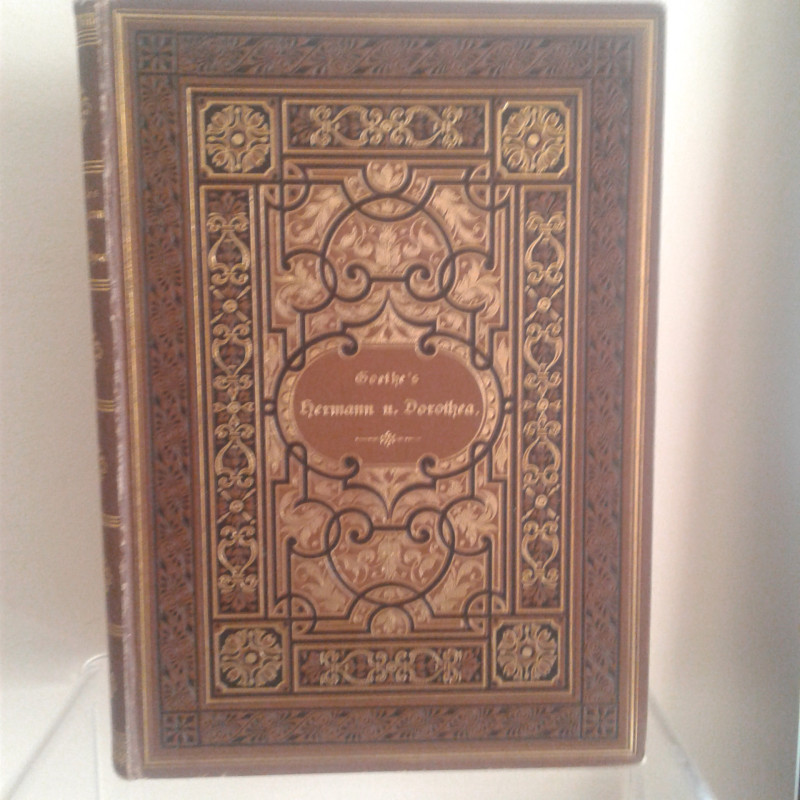