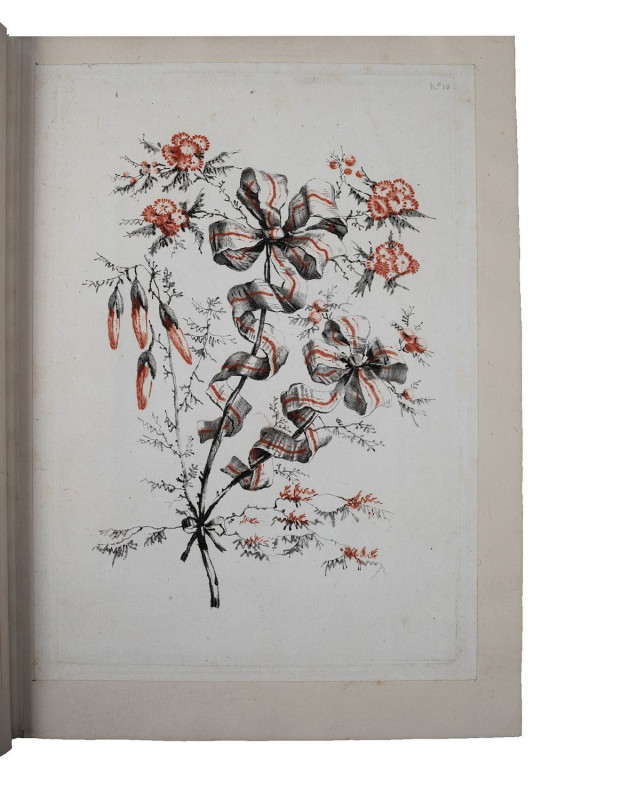 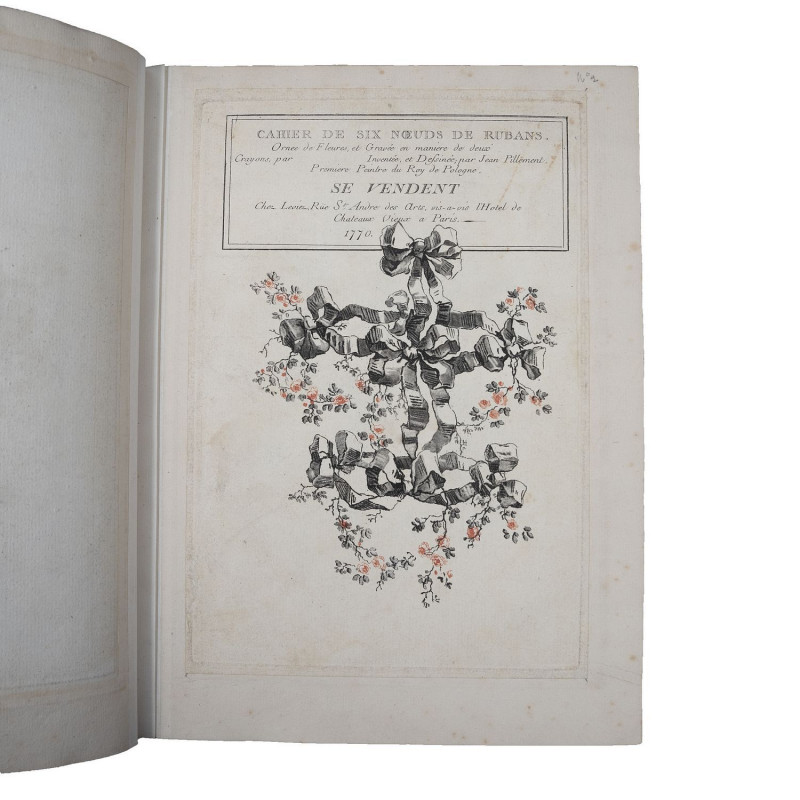 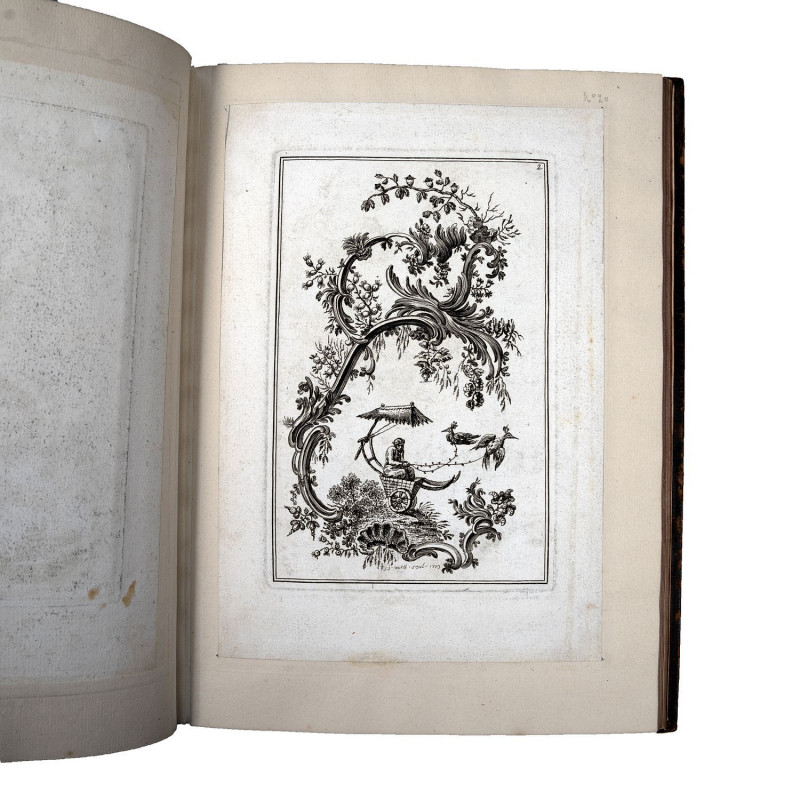 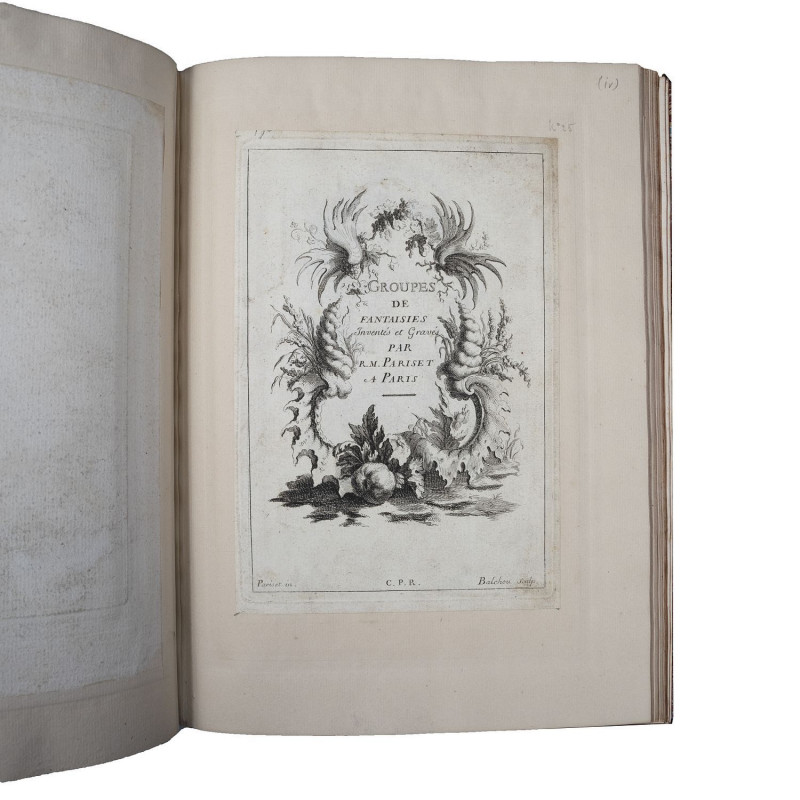 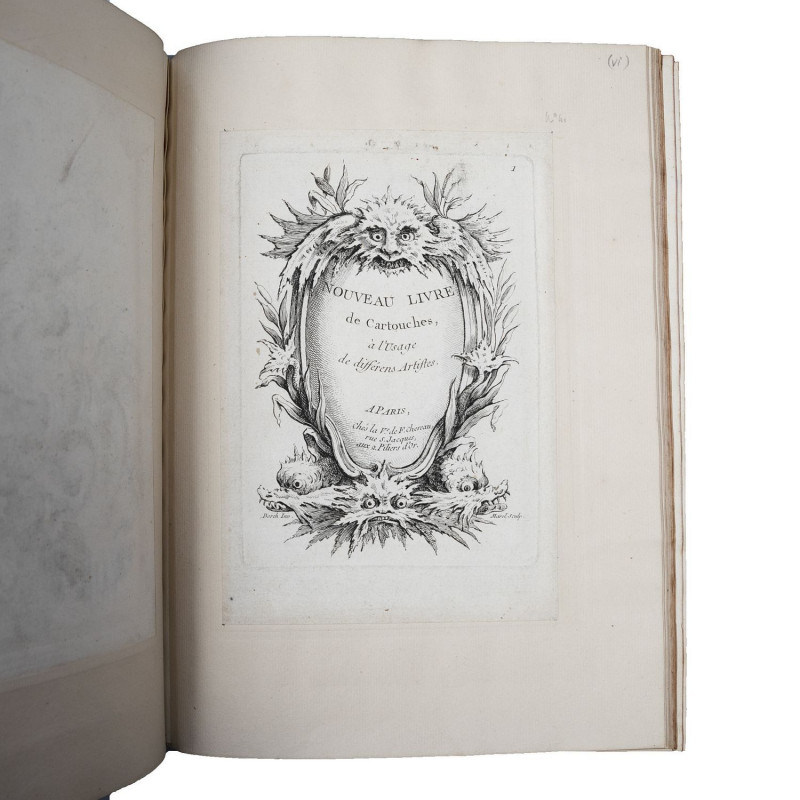 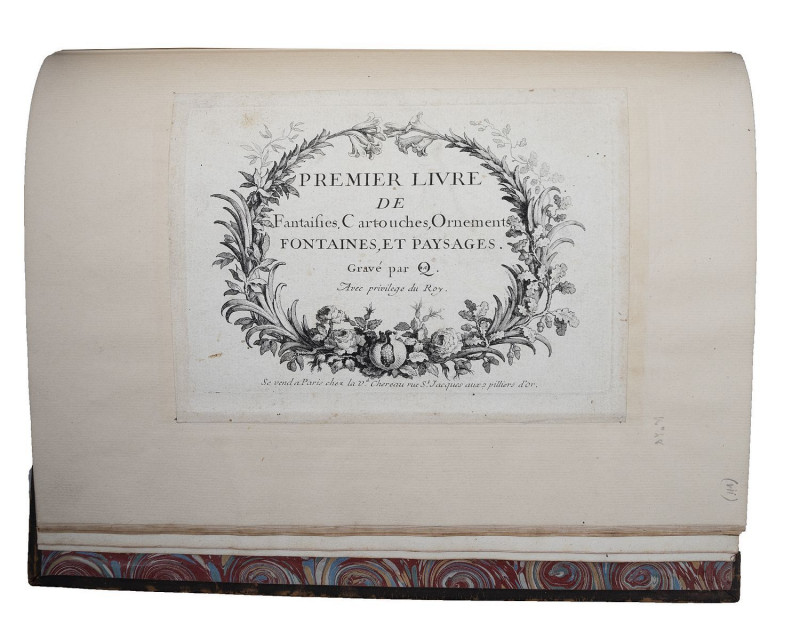 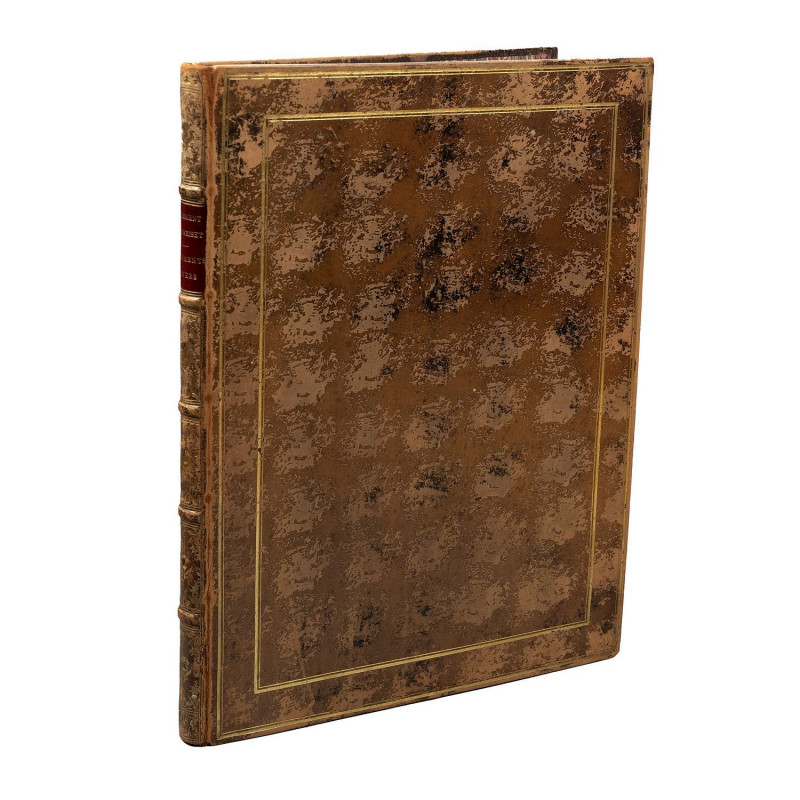 Ornee de Fleures, et Gravée en maniere de deux Crayons, par Inventée, et Dessinée par Jean Pillement. Premiere Peintre du Roy de Pologne. Complete set of six crayon manner engravings made from designs from Jean Pillement and engraved by Louis Gautier-Dagoty (two signed plates) and Arnaud-Eloi Gautier-Dagoty (four unsigned plates). Printed in black and red with an additional suite in the variant state printed in black, the set comprises a total of twelve plates including the two title pages (250x180mm). The engravings are trimmed close to the plate mark and pasted onto blank leaves (292x225mm). Slightly soiled in places and some staining to the monochrome prints but this is a lovely set, in very good condition, of a scarce collection of Rococo designs by one of the leading artists and designers working in the style. Worldcat records no copies. We have located only two complete sets at the Getty and the Ackland Museum at the UNC, Chapel Hill. Nineteenth century mottled calf, gilt borders to covers, spine with five raised bands and gilt decoration in the compartments with red morocco label lettered in gilt. Rubbing to covers and extremities and wear to corners. Bound with six other collections of beautiful engravings of Rococo designs.

1. 6 stipple-engraved plates of garlands and bunches of flowers printed in red. Paris: Ches la Ve [Veuve] de F.Chéreau, Les Deux Pilliers d'Or, n.d. Although undated, these engravings will have been made between 1729 and 1755. François Chéreau died in 1729 and his celebrated printing business (he was "engraver to the Cabinet du Roi") at Les Deux Pilliers d'Or (sic) was run by his widow ("Veuve Chéreau") until her death in 1755. Plates measure c.75 x 100mm. Some slight soiling and marking to the margins of the plates but overall in very good condition. No copies traced.
2. Cahier de Petits Ornements et Figures Chinoises. Inventée et Dessinée par J. Pillement. Six engraved plates by J.J.Avril including pictorial title page. Paris: chèz le Pere et Avaulez. 1773, c.190 x 125mm. A scarce set of Chinese designs by Pillement "the best known of the designers and painters of eighteenth-century chinoiserie". Save for some slight marking and an ink stain to the margin of the title page, this suite of prints is in superb condition. A full set is held at the BNF and the V&A have two of the plates.
3. Groupes de Fantaisies Inventés et Gravés par R[obert].M[enge]. Pariset a Paris. n.d. Engraved by Balchou [i.e. Jean-Joseph Baléchou]. 8 engraved plates including pictorial title, most c.160 x 110mm. Slight soiling to the title page and one other plate but otherwise in very good condition.
4. Fruits et Fleurs Naturels et fantastiques. Lyon chez Pariset. n.d. 8 engraved plates including pictorial title by R.M. Pariset, c.210 x 150mm. The plates are closely trimmed and the final four letters of 'sculp' are missing from the bottom right corner of the title page). Pariset worked in Lyon, Paris and London. His career was cut short by bankruptcy in 1762 and all his work predates this. This (and the previous) suite are perhaps his most important collections but his work is scarce. We have located a set of the Fruits et Fleurs and the Groupes de Fantaisies (bound together) at the Bibliotheque d'INHA but none in the UK or USA.
5. Nouveau Livre de Cartouches à l'Usage de différens Artistes. Paris: Chès la Ve de F. Chereau, aux 2 Piliers d'Or. n.d. c.165 x 120mm. 7 engraved plates by Marel after Borch including pictorial title page. Neither Borch nor Marel appear to be well-known or prolific but this is a rather splendid collection of Rococo cartouches with elements of grotesquery. By virtue of its shape, the cartouche lent itself to Rococo imaginings and books of cartouches are not uncommon in the eighteenth century but this set printed by Veuve Chéreau is rare. We have traced a full set at the Bibliotheque d'INHA and a single leaf (number two in the set) at the Kunstbibliothek in Berlin.
6. Premier Livre de Fantaisies, Cartouches, Ornements, Fontaines, et Paysages. Gravé par P.Q.C. (Pierre-Quentin Chedel) Avec Privilege du Roy. Paris: Chèz la Ve de F. Chereau, aux 2 Piliers d'Or. n.d. c.115 x 170mm. 5 engraved plates including pictorial title. Chedel (1705-1763)was prolific but this first book of Fantaisies and Cartouches is scarce. Two copies of the Second Book are recorded (at the National Gallery of Scotland and the Sterling Morton Library) but we have located no copies of the Premier Livre.

Although all the engravings in this collection are fine, the most important artist represented here is Jean Pillement. From a family of painters, Pillement trained as painter in the manner of Watteau and Boucher before working as an ornament designer at the Gobelins tapestry factory. He was Court Painter to the King of Poland and lived for ten years in London where he contributed to the growing taste for the Rococo and Chinoiserie. He was endlessly inventive producing whimsical and charming designs that were used for wallpaper, architecture, silver and furniture. As a painter, he was highly regarded: he was Marie Antoinette’s personal painter at Petit-Trianon; he was admired by William Beckford and, after Pillement’s death the Duke of Wellington bought three landscapes for Stratfield Saye where they still hang. 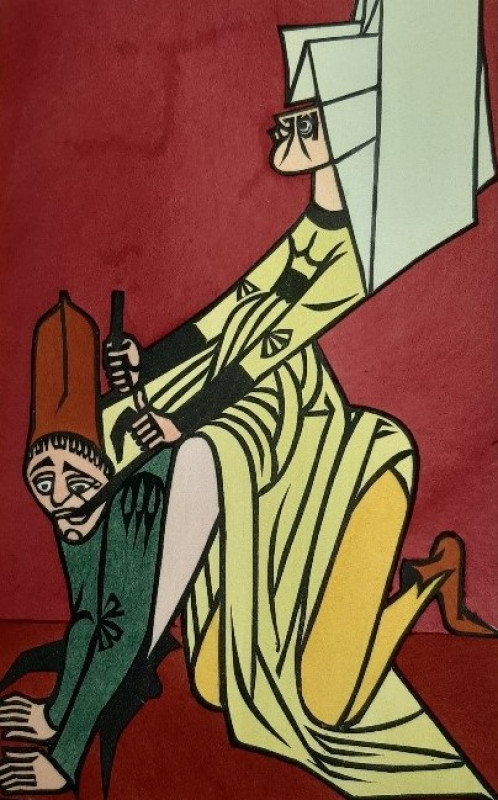 London: Printed by A Strahan for T. Cadell Jun. and W. Davies.

Programme and Souvenir. The Football Association's... 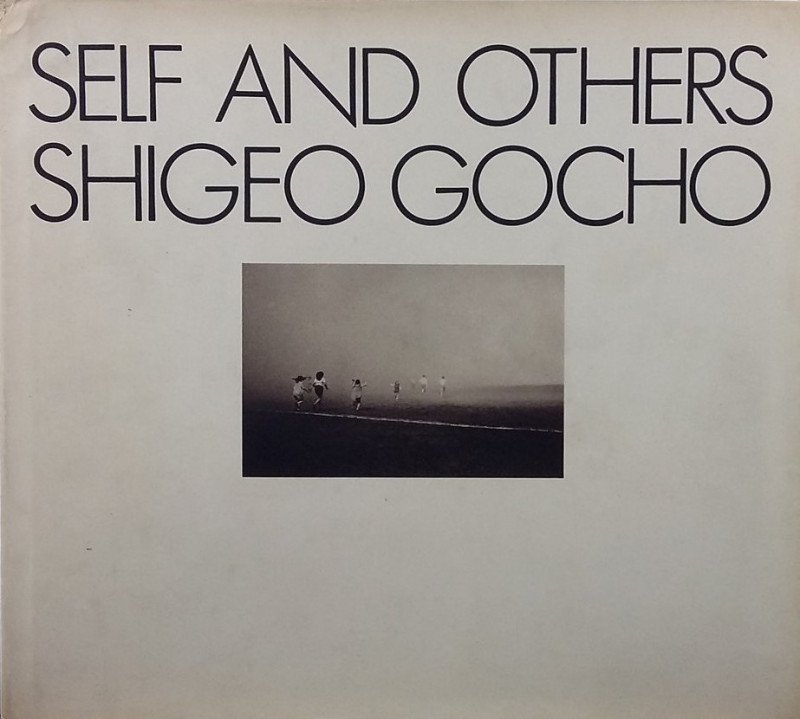 The Professed Cook: Or, the Modern Art of Cookery,...