Regretfully, due to Covid-19, we have decided to cancel all fairs from May to August. Keep checking our website for updates.  Unfortunately, we have also had to cancel our York National Book Fair in September.  More details on our Facebook page.
OUR MAY ONLINE BOOK FAIR IS STILL RUNNING
Back

The Battle of the Pictures

A satirical scene of a battle between Old Master paintings and the modern paintings of Hogarth, designed as an entry ticket for an auction of Hogarth’s works in February 1745. The sale was not an overly successful one for Hogarth, despite the calibre of his works on offer, which included ‘A Harlot’s Progress,’ ‘A Rake’s Progress,’ ‘The Four Times of Day,’ and ‘Strolling Actresses Dressing in a Barn.’ The image on the ticket depicts an auction house, where row upon row of Old Master works are ranked as if for battle. The suggestion is that some of the most popular, including Europa and the Bull, Apollo Flaying Marsyas, and St Andrew on the Cross appeared so frequently in such sales that the majority must have been forgeries. The endless ranks of reproductions are suggested by the addition of ‘Dto’ (’Ditto’) to the corners of each. Despite this, even forgeries of Old Masters frequently outsold modern works, as can be seen by the battle, where a number of Hogarth’s own pictures are pierced or bashed by religious and classical images of similar composition. In the corner of the scene, Hogarth’s characteristic palette and bunch of brushes is used almost as a stamp of approval on the ticket. The print weighs in on the contemporary ‘Quarrel of the Ancients and Moderns,’ inspired directly by Swift’s short literary satire ‘The Battle of the Books.’ The Inscription above reads: The Bearer hereof is Entitled (if he thinks proper,) to be a Bidder for Mr. Hogarth's Pictures, which are to be Sold on the Last day of this Month. Lubertus van Gerrevink watermarked paper. William Hogarth (1697 - 1764) was born in London, the son of an unsuccessful schoolmaster and writer from Westmoreland. After apprenticeship to a goldsmith, he began to produce his own engraved designs in about 1710. He later took up oil painting, starting with small portrait groups called conversation pieces. He went on to create a series of paintings satirising contemporary customs, but based on earlier Italian prints, of which the first was The Harlot's Progress (1731), and perhaps the most famous The Rake's Progress. His engravings were so plagiarised that he lobbied for the Copyright Act of 1735, commonly referred to as ‘Hogarth’s Act,’ as a protection for writers and artists. During the 1730s Hogarth also developed into an original painter of life-sized portraits, and created the first of several history paintings in the grand manner.
Author William Hogarth
Condition Good impression, but trimmed within plate mark and all edges but top. Vertical fold, with right side of sheet graingerised.

The Battle of the Pictures 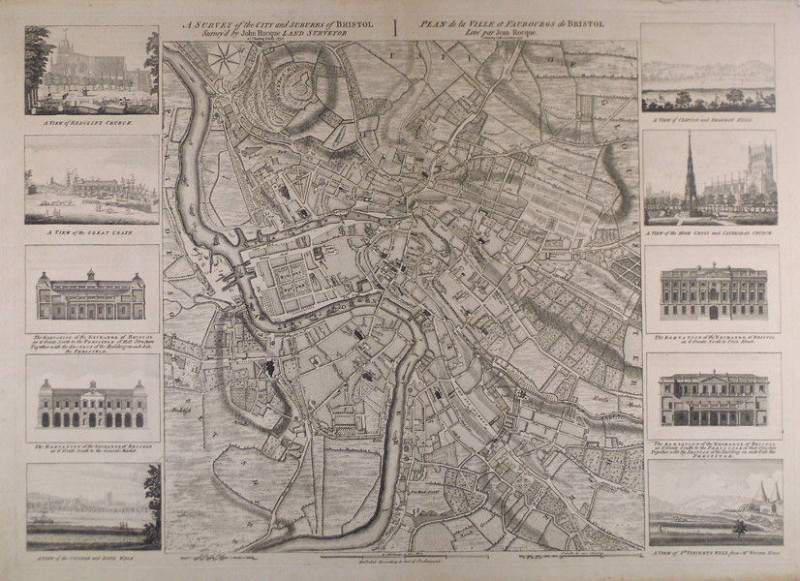 A survey of the city and suburbs of Bristol survey...

A View on the Banks of the Thames